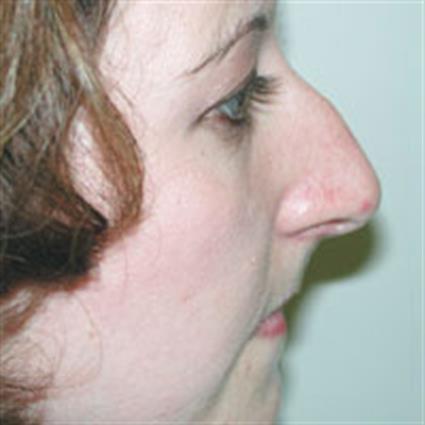 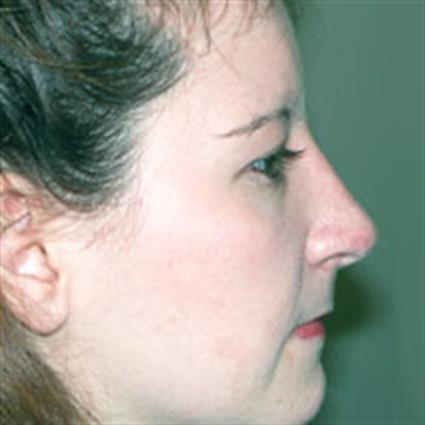 This Toronto area patient felt that her nose was too prominent, and was also displeased with the large bump at the bridge. When she met with Dr. Rival at our plastic and rhinoplasty surgery offices in Toronto, she explained that she wanted a her nose to be straighter and smaller, and balance out the rest of her features.

For patients who have more significant deformities, and in certain other cases, an “open” rhinoplasty is appropriate. For many other patients, though, Dr. Rival can perform the entire procedure as an “endonasal” procedure, through incisions hidden inside the nostrils. Based on this patient’s physiology and goals, she and Dr. Rival agreed to an endonasial reduction rhinoplasty to remove excess bone and cartilage at the bridge of the nose. In order to maintain a balanced look, Dr. Rival also set back the nose tip slightly.

After her procedure the patient has a much smaller nose that no longer detracts from the natural, balanced shape of her face. Her nose tip is a proportionate size for her face, and the tip and the bridge no longer overproject. Her nose job in Toronto has dramatically improved her facial balance, and her features now harmonize very well.

By checking the box on the contact form, you agree to the Terms of Use listed here:

Communications through our website or via email are not encrypted and are not necessarily secure. Use of the internet or email is for your convenience only, and by using them, you assume the risk of unauthorized use.

By checking this box you hereby agree to hold Richard Rival, MD, FRCS, its doctors and affiliates, harmless from any hacking or any other unauthorized use of your personal information by outside parties.